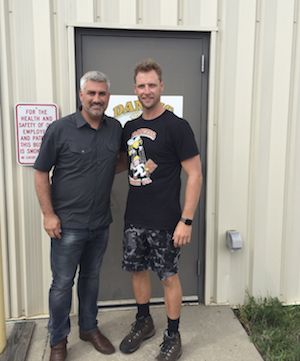 The sweet success story at Danzig Honey Co. in Wishek, N.D., is about to get some national exposure.

Taylor Hicks, a world-famous singer who won the fifth season of "American Idol" in 2006, has expanded his entertainment career beyond music and now hosts "State Plate" on the INSP cable TV channel.

On the program, Hicks fills his dinner plate with an appetizer, an entree, a side dish and a dessert. Each item is representative of the food produced in the state featured on the current episode.

North Dakota leads the nation in honey production — making the visit Hicks and a production crew of about 10 people paid to Wishek in August a perfect fit.

"We got a call in July that they were interested in coming out here," says Erik Dohn, of Danzig Honey Co.

"I guess they were looking for a honey operation in North Dakota and a Google search landed them on our website, danzighoney.com, which is designed by David Salwei.

"The whole process from that first phone call to the filming took no more than 30 days."

Hicks donned the traditional beekeeper's uniform of a hood and coveralls. He joined Dohn at the company's production plant in Wishek and in a nearby field to get a quick taste of the honey-making process.

"It was just incredible to see, what a team these bees are, and what a team Erik and his employees are," Hicks told The Wishek Star last week in a telephone interview.

Hicks is an Alabama native. The TV production marked his first visit to North Dakota and his first experience with honeybees.

"During their short lifespan, a single bee produces just a teaspoon and a half of honey. But together, the bees across your state make about 40 million pounds every year. That's a remarkable fact that has stuck with me."

The segment in Wishek takes up about six minutes of the half-hour "State Plate" program. Hicks also traveled to Buchanan, Devils Lake and Baldwin for the North Dakota episode.

"Now you're talking my language," Hicks exclaims during the show, referring to his Southern roots. "Sweet and spicy cornbread!"

Dohn says honey was not the only local food favorite Hicks and his staff got to try during their stop in Wishek.

"We sent them over to the Big Screen Bar and Grill, which happened to be serving chicken and dumplings as the lunch special that day.

"They loved it. They cleaned their plates and told us they wanted more."

"It's been such a blessing for me doing 'State Plate,' because we can get out and experience the delicious foods everyone loves, in small towns like Wishek, and throughout the U.S.," he says.

During the first two seasons of the show, Hicks has sampled crab cakes in Maryland, chili in Texas, potatoes in Idaho, and more, as he travels from coast-to-coast.

When this season ends, Hicks will have visited 36 of the 50 states to document the most-popular foods.

The fact Hicks spent an entire day in Wishek last summer had to be kept under wraps until production work was completed and a premiere date was set for the North Dakota episode.

"We signed an agreement with INSP and we were literally sworn to secrecy," says Dohn, with a chuckle. "But I can finally talk about it now.

"It was really great to have a celebrity in our midst. Everyone at Danzig Honey Company had fun. Taylor is welcome to come back and see us again anytime."

Erik Dohn's parents, Bryan and Deb Dohn, have owned Danzig Honey Co. since 2000. They named it after Danzig, a ghost town a few miles south of Wishek.

All of the company's honey is produced in southcentral North Dakota. Bees make the honey from floral sources, such as alfalfa, clover, sunflower, canola and wildflowers — including dandelions, lilac and others.

The majority of the Danzig honey sold at the plant and in stores comes from clover and alfalfa because of its high quality and light, pleasant taste.